In the first quarter in 2015 chicken was chosen 20.9% of the time, or just over one in five orders. This has grown in importance on Q1 2014, and has claimed the No. 1 spot from pizza as the most popular choice.

Other interesting trends in terms of food choice to note:

It’s not that surprising given that chicken is now the most popular protein consumed by households in the UK and Ireland. That in turn is driven by its versatility, its low fat content, and its value for money versus other meat types. 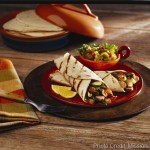 Endless Chicken: Orange and Lime Chicken Fajitas
We use cookies to ensure that we give you the best experience on our website. If you continue to use this site we will assume that you are happy with it.YesNo